Sukanya Chakrabarti presents on “Performing [as] Bauls: Reimagining Performance, Identity and Spatiality Between Tradition and Modernity”

We kick off the first of this year’s talks at the Center for South Asia’s Graduate Brown Bag Series with Sukanya Chakrabarti’s “Performing [as] Bauls: Reimagining Performance, Identity and Spatiality Between Tradition and Modernity.” A doctoral candidate at the Department of Theater and Performance Studies, Stanford, Sukanya’s research includes the spiritual and therapeutic possibilities of theater and performance, religion, rituals, folklore, gender studies, and multiculturalism. In her research, Sukanya traces the changes in the identities of the Bauls, itinerant folk singers of Bengal, employing a performance-ethnographic approach. 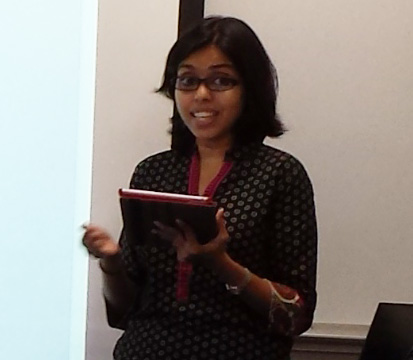 Based on Fieldwork Research in India and Bangladesh


About the Graduate Brown Bag Series

The Center for South Asia’s Graduate Brown Bag Series is a forum for graduate students to showcase their ongoing work. At the CSA Graduate Brown Bag Series, grad students will present their work and receive feedback from their peers and professors, all while enjoying a delicious lunch provided by CSA. The Series aims to be an opportunity for cohort-building among grad students at all stages of their degree and provides a venue for workshopping ideas.