GAUHAR traces the story of one of India’s first mass media superstars at the turn of the last century!

An Armenian Christian who later converted to Islam, Gauhar Jaan was a naturally gifted musician with a wide repertoire. One of the earliest women artists who seized the opportunity that came with the advent of recording technology, hers was the first Indian voice to be recorded in 1902, and during her life, she cut close to 600 records, with her fame travelling as far as Europe, with her face emblazoned on matchboxes and postcards!

GAUHAR lays bare her life with all its attendant myths, legends, and folklore, some of which are recorded, some apocryphal; as well as the times during which she lived and made exquisite music.

Her independent lifestyle and feisty nature symbolise the indomitable spirit of the resurgent women musicians of her time, and her high – pitched and flirtatious announcement – ‘My name is Gauhar Jaan’, at the end of all her recordings, epitomises a milestone in the history of Indian classical music, one that would change forever its content, structure and style of presentation. 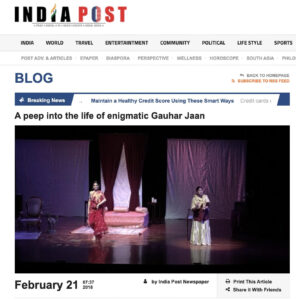 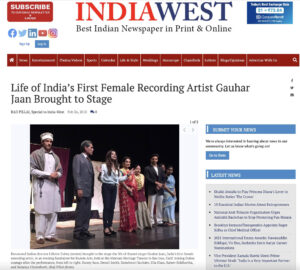